Out this week from Titan, in the UK only, is issue #15 of their utterly essential Transformers comic/magazine. The lead strip, written by me and drawn by TF newcomer Kieran McKeown (inked by Kris Justice), is the second part of the 2-part ‘Aftermath’ story, which picks up on our still reeling cast of Autobots and humans (and planet Earth too for that matter) from the epic ‘Twilight’s Last Gleaming’ arc. Set, as that story was, in the alternate post-movie universe unique to the Titan TF comic, ‘Aftermath’ shows the extent of the fallout from the Decepticon occupation of North America (and their attempt to rewrite the essential geological structure of the planet). Right now, though, the Autobots are an endangered species, Starscream (via his mind-controlled human puppets in high places) manipulating events to rid himself of Earth’s protectors. Under attack from NATO mobile artillery, defending the sick and wounded in a field hospital, Optimus Prime’s forces have their backs well and truly up against the wall. And as bad as it seems right now, it’s going to get much, much worse. In just two issues’ time, the biggest TF-UK storyline of all kicks into high gear. If you thought ‘Twilight’s Last Gleaming’ was the pinnacle of excitement, think again. The countdown has begun to… ‘Return to Cybertron.’ Look for the Script (W)rap for the first part of that arc very soon. TF-UK #15 is in-store on Thursday August 14th. 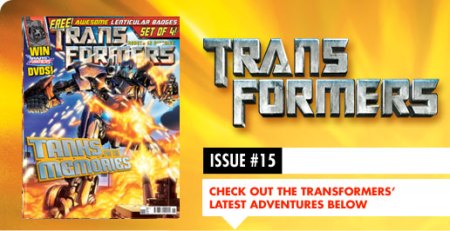 This entry was posted on Tuesday, August 12th, 2008 at 2:21 pm and is filed under Uncategorized. You can follow any responses to this entry through the RSS 2.0 feed. You can leave a response, or trackback from your own site.