Out this week (Thursday 11th September), in the UK only, is issue #16 of Titan’s pulse-pounding, knee-trembling, trouser-shattering (apologies to Nick Roche) Transformers comic (though look out for IDW’s series Saga of the All Spark too, as that reprints/repackages the UK strips for the US market), which features an all-new UK originated strip — ‘Dark Spark,’ written by me and drawn by Jeremy Tiongson (colour by Jason Cardy). If you’ve been following the ‘Twilight’s Last Gleaming’/’Aftermath’ storyline you’ll know we’re knee-deep in the alternate Transformers movie universe by now, rolling out and onwards from a not-so-happy ending to 2007’s big screen opus. Well, in ‘Aftermath,’ a precious fragment of the All Spark was recovered by Skyblast and it’s now in the hands of Autobot medic Ratchet, who’s busy weighing up the pros and cons of some fairly drastic action regarding that very fragment. Sure, it might give them a much needed edge in the ongoing battle against Starscream’s Decepticons, but how high a price might they have to pay for victory? The All Spark was well and truly corrupted by Megatron’s malign influence, and any Autobot given a new lease of life, may not be an ally for long. Get ready for the return (maybe happy, maybe not) of… Jazz! Yep, ‘Autobot’ Jazz is back, and the repercussions for, well, just about everyone, will be huge! And there’s more! More strip (Beast Wars: The Ascending, Megatron: Origin), more features, more competitions, more news and previews of the October debuting UK-exclusive Transformers Animated comic and a fantastic FREE Rotor Blaze Battle Launcher. Phew! 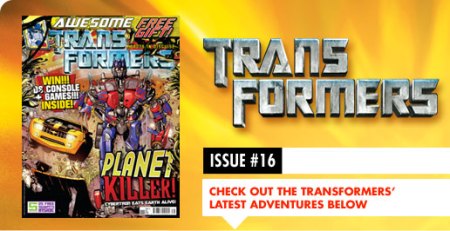 This entry was posted on Tuesday, September 9th, 2008 at 8:38 am and is filed under Uncategorized. You can follow any responses to this entry through the RSS 2.0 feed. You can leave a response, or trackback from your own site.