Another great swathe of Transformers-related signed/rare goodies up for grabs over on my ebay page, including an ultra-rare Million Publishing/Takara-Tomy Artfire toy, a Regeneration One super-pack and some rare Geoff Senior cover variants signed by the man himself. You can check out my current lots here.

Here we go again, with a post-game (but pre-release) ramble on the latest issue of Transformers: Regeneration One to hit the stands (#89 is out next Wednesday, March 13th — lucky for almost everyone I’d say). As usual, my free form digressions into content and behind-the-scenes process on any given issue come with a capacity for spoilers, though I do try to tease more than outright reveal, so be warned. Stop now. Here. Proceed no further, if you’re the least bit concerned about such energy saving reveals, otherwise proceed… So, the penultimate chapter of the ‘Natural Selection’ arc, and things are about as bad as they can get. For Grimlock, in way, way too deep, even for him, and for his fellow Dinobots (Snarl, Swoop and Sludge) too. In fact, that trio of Dinobots (somewhat ignored since #86, and then seen only in flashback or dream-sequence) take centre stage here. Still at large in Scorponok’s new Iacon (with its more murderously inclined population), but only just. And guess what? They’re not the least bit happy about their commander’s alliance with Scorponok, whatever his ultimate motivations, to the point where the thing that’s uppermost in their minds is not so much survival, as putting their own house in order. Grimlock has defied ‘the code’, and that’s the biggest Dinobot ‘no, no’ of all. No happy endings are assured here. What else? Well, a whole lot actually. In the very core of Cybertron, Hot Rod faces an impossible choice, and learns the faith-testing truth about the entire Transformers race. Optimus Prime embarks on a mission to clear Earth of any remaining possible dangers (of Cybertronian origin), a task that sets him on a collision course with the Ark’s current inhabitants, and where we learn more about last issue’s ‘shock’ revelation. Plus, Ultra Magnus and the Autobots are on the home leg of their long journey back from Earth, unaware that the reception in Iacon is likely to be warm… in all the wrong ways!  UPDATE: The official IDW preview of #89 is now live, here, and so is the official Transformers facebook page, where there’s now a Q&A with me up, which (while still RG1-centric) is more about the writing process than the content. 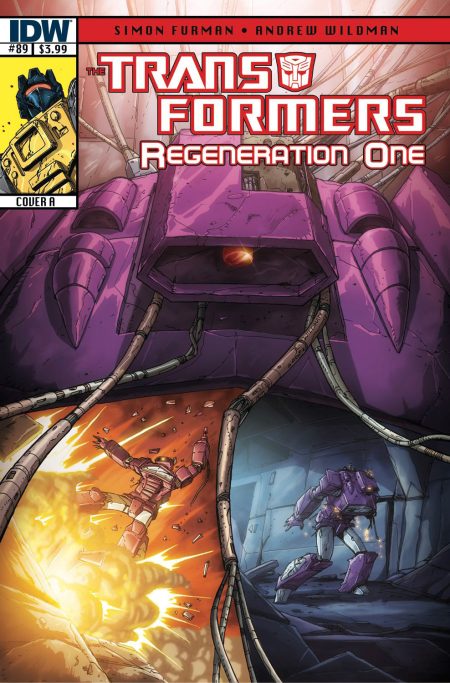 Well, London Super Comic Con has come and gone (and what a great weekend that was, lots of people stopping by to say hi and have stuff signed!), and I’ve barely drawn breath before I’m off again. Next stop (in a jam-packed 2013 personal appearance calendar) is Belfast, next weekend (March 9th & 10th), for the W5 centre’s incredible Robot Nation event. I’ll be there all weekend, along with Transformers Spotlight: Megatron and Last Stand of the Wreckers writer/artist Nick Roche, talking about the secrets of creating Transformers comics for IDW (and in my case, many publishers before them) and signing ourselves silly. We’ll also be presenting (for those who haven’t caught it before) our script-to-finished page presentation (with live commentary), which takes a page of Spotlight: Shockwave through all stages from inception to printed page. In addition to us, there’s a whole host of robot-centric stuff (for all the family) to enjoy over the weekend. Be great to see you there. For more information, check out the W5 site here.