And here we are, after the short but essential detour that was issue #0 (just how essential you’ll see once we hit our final chunk of RG1), at the wall-to-wall drama and destruction finale to the third arc, “Destiny”. Hang onto your hats as Transformers: Regeneration One #95 hits the stands this coming Wednesday (October 23rd). This one has a truly cinematic summer blockbuster feel, with relentless action on all fronts. As usual, ahead of publication, here’s my scribely musings on wrapping up the penultimate RG1 arc. But be warned, there are inevitably some small spoilers, so if you’d rather go in cold, cease and desist now. Otherwise, here we go… So, where we left things several intriguing clashes were in the offing: Omega Supreme vs Monstructor, Blaster vs Soundwave, the Wreckers en route to Bludgeon’s WarWorld, Ultra Magnus battered but triumphant after his battle with Galvatron (and now pitched into the all-out rearguard action against Bludgeon’s nigh-on unstoppable Blitz Engines), Grimlock and the Dinobots surrounded by the feral Primordials at the heart of Cybertron (in the mysterious Primus Chamber). Can the Wreckers cut the supply of Matrix energy (courtesy of the remains of Thunderwing) to Bludgeon’s Blitz Engines? Not if Bludgeon himself has any say in the matter, which he certainly does. Our master of Metallikato shows exactly why he’s one of the most feared and deadly Cybertron warriors, as he takes on all the Wreckers… at once! And grudge matches abound, as Blaster squares up to his fellow ‘sonic’ warrior Soundwave. Blaster wants payback after Soundwave tried to have him silenced (permanently) in issue #92, but don’t expect Soundwave to just roll over. (Trust me, this one rocks!) And what about the freshly-minted Rodimus Prime… where does he fit into all this? And as always, as some storylines reach their conclusion others are just gathering pace, ready for the total meltdown that is our final arc, The War to End All Wars. If you think things are looking bad for our beleaguered robots in disguise this issue, wait’ll see what’s just around the corner. It’s bad, y’know. The full IDW preview of the issue is up here if you just can’t wait until Wednesday. What am I talking about? I can’t even wait! 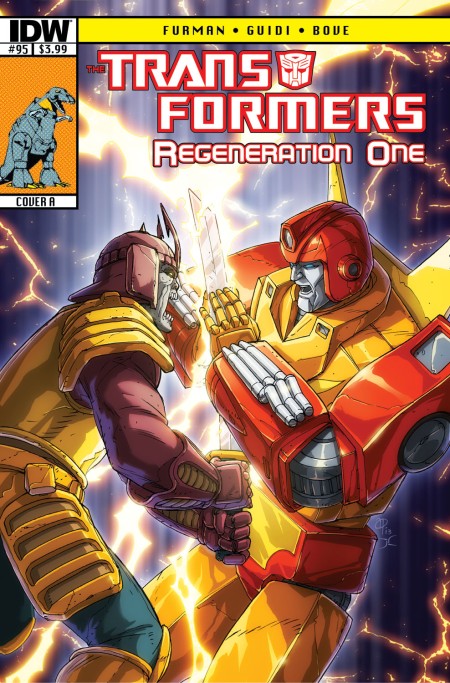 This entry was posted on Monday, October 21st, 2013 at 8:20 am and is filed under Uncategorized. You can follow any responses to this entry through the RSS 2.0 feed. You can leave a response, or trackback from your own site.