Here we are, at whatever the one before the penultimate issue is called, the last but two chapter of the original and founding Transformers saga. In other, less convoluted, words, here’s Transformers: Regeneration One #98 (of 100), which hits comic stores this coming Wednesday (January 29th). And boy, does this one kick some serious assets. We’ve been kind of teasing the threat posed by/true power of (former Cybertronian senator) Jhiaxus for a while now, but this issue should leave no one in any doubt about his lofty niche in the pantheon of Transformers villainy. But, before you read on, be warned, my authorly digressions do have a hint of spoiler about them, so if you’d rather have your issue served up unsullied by loose-lipped internet blather, cease reading now. Okay, so, where’d we leave things. Oh yeah, Rodimus Prime just got smacked around by Jhiaxus and he’s not taking it lying down. In fact, he’s mobilizing the whole dad-blasted Cybertronian fleet and going in all guns blazing. Not your average, agonize-about-it-for-a-decade Prime this one. Oh no. If this were toy branding, it’d be Affirmative Action Rodimus Prime emblazoned on the packaging. But is such all-guns-blazing action against a largely unquantified foe a wise move? Maybe not. Anyway, once the action kicks off it never stops, with the kind of full on epic battle the like of which this comic has never seen. “Could there possibly be room for anything else,” I hear you wonder. Well of course. There’s also the return to, um, unrestrained action for not one but TWO  uber-fan favourites. Both of which you’ve been crying out for. But one of these is kind of good news, and one is very bad. Especially for poor Optimus Prime. Plus (oh yeah, it keeps on coming), the mystery of Galvatron and those Acolytes of Unicron takes another unexpected twist. Alrightyyy! No full IDW preview yet, but as soon as one surfaces I’ll update and link to it here. NOW UPDATED with link to preview. 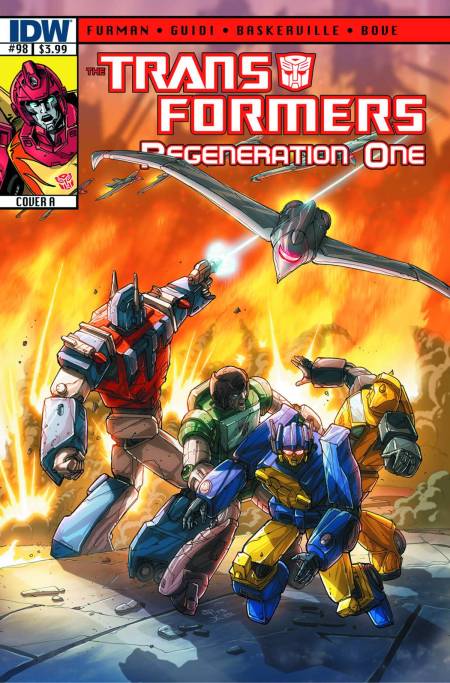 This entry was posted on Monday, January 27th, 2014 at 8:56 am and is filed under Uncategorized. You can follow any responses to this entry through the RSS 2.0 feed. You can leave a response, or trackback from your own site.