Okay, so, just when I thought my 2013 convention commitments had taken me as far afield as I could go this year (without actually leaving the country), along comes Dundee’s 2013 Comics Day, aka Starblazers — on Sunday 27th of October. And yes, I’ll be there, along with Regeneration One artist Andrew Wildman and a host of other luminaries in the comics field. As usual, I’ll have exclusive signed comic/script packs and other goodies for sale at the event, and Andrew and I will be co-hosting a panel in the afternoon. Check out this link for more details.

And just a note to say that, regretfully, I won’t now be attending Thought Bubble in Leeds at the end of November. Apologies if you were counting on tracking me down there. Fellow RG1-ers Andrew Wildman and John-Paul Bove will both still be in attendance though. 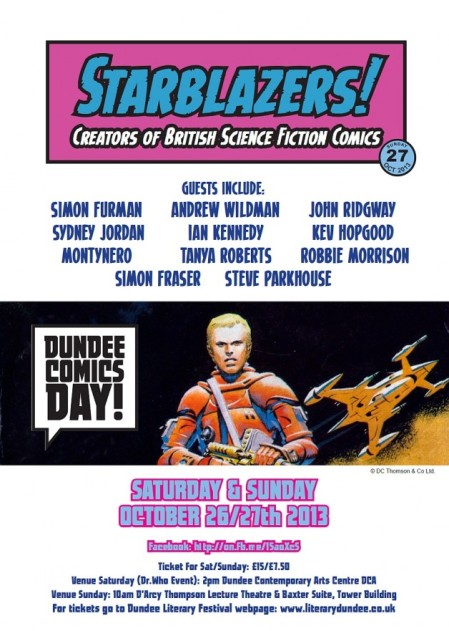 This entry was posted on Saturday, October 19th, 2013 at 10:31 am and is filed under Uncategorized. You can follow any responses to this entry through the RSS 2.0 feed. You can leave a response, or trackback from your own site.